Last month, I was kindly invited to speak at the above conference in Indore by the Confederation of Indian Industry. The audience included local entrepreneurs, marcoms professionals and students studying the disciplines.

I spoke about 9 shifts that are radically changing the way brands are and can communicate with their audience, before explaining how the application of one single piece of amateur psychology can help brands address and navigate the same. Let’s start with the 9 shifts:

The great unwritten law of social virality is the idea of gratification – and I don’t mean the brand’s. I mean the audience’s. Why should they share your content? What is their incentive to participate in your campaign? Motivations can range from prestige (especially with content that is somehow ‘exclusive’ or ‘private’) to monetary (offering discounts to people who participate in your campaign), but the key is to provide some form of acknowledgement to your audience; it is they, who are going to propagate your message after all.

My ‘earned/editorial’ instincts tend to favour the ‘prestige’ approach to gratification; if you can create genuine value for your audience (premier access to a product or service), exclusive interaction with a celebrity, or some form of public recognition (the ‘super fan’ logic), there is an opportunity to develop valuable relationships that last.

Personalisation has become the ‘social currency’ of the age. People – particularly younger audiences – are systematically more likely to share content that they can make their own, to which they can add their spin, their identity. The beauty of Donald Trump’s accidental ‘covfefe’ Tweet, published last May, was the ease with which people could personalise it, and contribute their take – and gratification – to the whole episode.

And the brand in all of this? The paradox is that virality is rarely dependent on the brand, it is actually all about the audience. This is one of the characteristics of the ‘post-protagonist’ age in which brands are operating. So the best response to the client ‘viral video’ request is to start studying your target audience as quickly as possible. 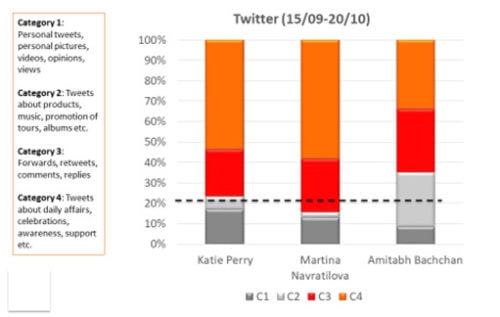 In the analysis (above), categories 1 and 2 refer to content about the individuals themselves (their events, their music/films, merchandise etc.), while categories 3 and 4 refer to their response and opinions on external events; in short, the rest of the world. On average, our celebrities spent only 20% of their time talking about themselves, the rest about everyone and everything else.

Celebrities have understood the value of relevance; the more they associate with the world which their audience inhabits, the greater the degree to which they’ll be able to influence them. And brands which appreciate this logic will enjoy the same benefits.

Which brings us neatly to the piece of amateur psychology required to navigate the above – ‘Noisy Neighbour Logic’. The more you talk about yourself, the less other people will; the more to talk about and relate to your audience, the more they’ll talk about you.

We’ve all experienced the egocentric neighbour whose conversation never ventures beyond the success of his progeny, his golf handicap, his amazing pension plan, or the killing he made on the stock market. You know the type. Other people’s conversation is simply a trigger for him/her to talk about him or herself. Bizarrely, some brands behave in exactly the same way! Social media is simply the aggregation of human behaviour; so, firstly, listening and making yourself relevant to your audiences’ conversations should be the (only) starting point.

Only brands which take the trouble to find out about what their customers actually care about, and make themselves relevant to the same, will be included in people’s conversations.

And, in an age of media disruption and disintermediation, only brands which really listen will be best placed to engage their audiences like never before; whether those audiences be consumers, employees, partners, regulators, investors, or other members of the community.

This is the simple but powerful lesson from Noisy Neighbour Logic.

Are PR Firms Ready for the Challenge of Interpreting the World for their Clients?