The Advantages of ‘Pinch Logic’

What Spanish ‘Horas Intensivas’ Taught Me about Time Management

Earlier in my career, I spent four years working in Barcelona managing the PR European mandate for one of HP’s businesses. After a decade in Paris, Spain was a relief for my family and me; daily life was far less confrontational, the pace more conducive to family life, and the working environment was more pragmatic (in France every new idea had to be justified, not merely on the grounds of logic, but also in philosophical terms! It can be a fatiguing experience).

In Spain, the balance between ‘work’ and ‘life’ was tilted towards the latter, compared to my previous assignment; a difference which was even more apparent with respect to the UK or US.  This difference was particularly apparent during the summer – July and August, to be precise – when I was introduced to the glorious concept of ‘horas intensivas’ (intensive hours). Originally conceived to avoid the intense heat of the Spanish summer, employees arrived in the office one hour earlier (typically, around 8am) and left at 2pm; committing to ‘work like crazy’ in between to complete tasks and meet deadlines.

How genuine the requirement to evade the excesses of the summer heat in fully air-conditioned offices is open to question; however, the practice remains common across Spain, with a variety of consequences.

First, international coordination – particularly with the West Coast of the US – became virtually impossible during August and September. 2pm Barcelona time corresponds to 4am in California, so real-time conference calls are off the agenda; as is ‘doing to call from the beach’ as suggested by one colleague. My experience is that the sound of seagulls, children playing, and music from the ubiquitous ‘chiringuitos’[1] nearby simply irritated the participants from the US stuck in their offices (often, at the beginning of their day).

Spanish pragmatism easily resolved this issue. We negotiated an amendment to the working practices convention obliging teams to commit to regular working hours during the summer on a rotation basis, in return for a few days extra of annual leave. So the office was always staffed throughout the day. A compromise which would have been considered a ‘betrayal of the Revolution’ in France!

Secondly, the early start actually reduced the level of tardiness at work; there was less traffic congestion and teams arrived with more energy and less stress for the day ahead. The early start also provided ‘clear space’ for teams to think and plan the day before being bombarded by emails and client calls.

Thirdly, under the ‘horas intensivas’ regime, the finite nature of time at our disposal became apparent; no one wanted to stay after 2pm. So, the order and manner in which work was completed evolved; time became the principle criterion for organising the working day.  Creative, analytical work was scheduled early to avoid interruptions; 11am to 2pm became the ‘media hour’ for pitching and follow-up, routine, repeatable tasks such as budgeting and content reviewing was inserted around these absolutes. Another consequence was an increased sense of camaraderie; no one wanted to be stuck at the office late into the afternoon, so everyone pitched in to help close the tasks for the day, irrespective of their personal responsibilities. 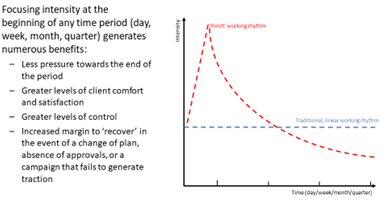 Fourthly, we applied ‘pinch logic’ to our daily activities (see right). By loading more work onto an early part of the given time period (day, week, month etc.), more time is available for contingencies; teams enjoy greater levels of control, and there are more resources (including time) to spend on more creative, proactive activities. In this case, the idea was to ‘pinch’ the traditional, linear work schedule into a concentrated peak of intense activity at the beginning of the day. The ‘horas intensivas’ season provided a unique opportunity to test and refine such techniques, which could also be deployed during the rest of the year.

It’s not a panacea, working six hours without a break is not always productive; by mid-day a combination of hunger and mental fatigue obliged many to take a break and finish work slightly later (still, before 3pm!).

In fact, many of the ‘time absolutist’ principles I covered last week[2] were developed during my time in Spain; particularly during the summer months. Spain ‘horas intensivas’ period shine an intense level of scrutiny onto teams’ use of time; lessons and benefits from which remain relevant today, even beyond Spain.

Public Relations and the ‘Cult of the Specialist’

The Truth About Integration

A View from the Inside