On the night of Tuesday 8 November India’s most common bank notes (500 and 1,000 rupees, respectively) ceased to be legal tender. The following morning, 1.2 billion people awoke to discover that the money in most people’s pockets ceased to be worth the paper it was printed on.

To clarify, imagine 20 and 20 euro notes or dollar bills simply being redefined as cigarette paper . . . . overnight. This is the shock that greeted the country on Wednesday morning. Shock that was soon replaced by the practicalities of exchanging worthless paper for legal tender. And India did not disappoint . . .

Overnight, 12,000 heavily guarded cash transporters crisscrossed the country to hand over fresh notes - $29,000,000 in total – to India’s most remote branches, fill up ATM machines, as well as to supply public offices such as post offices. A bank holiday was promptly declared for the following day (Wednesday), but bank staff had little chance of enjoying a break. Queues were already forming outside branches, cash machines, exchange bureaus, post offices and wire transfer services; despite the little possibility of new, legal notes being available. 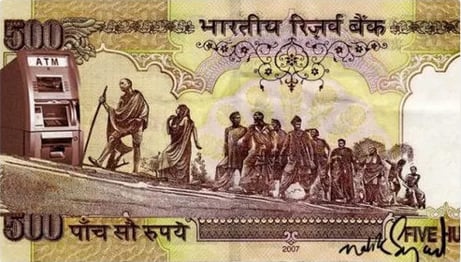 Social media had a field day, with 1,000 notes being transformed into satirical designs (left), while alternative and mobile payment services such as mRupee, ePaisa, PayTM and mPurse scooped up all the advertising space available. By 8am on the day after the announcement, my local café was plastered with adverts for cashless cards and mobile wallet services. They must have been printing them all night . . . Even my neighborhood church, Mt Carmel, in Bandra couldn’t resist a comment (see below). 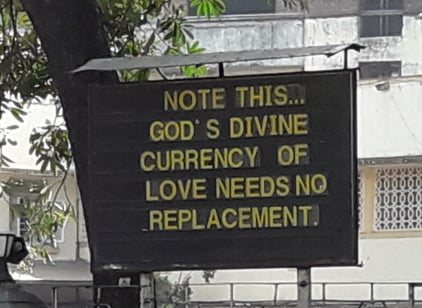 For my own part, I was travelling between Pune and Delhi last week and had no opportunity to go to the bank. None of the hotel or airport exchange services were operational, so I it wasn’t until Friday that I had the opportunity to queue up at the bank to stock up on legal currency. Fortunately, I’m generally able to operate using my bank card during the week (from petrol stations to restaurants) but my wife was stuck at home with a dwindling supply of notes. All her transactions – whether purchasing groceries or paying our watchman – are made in cash. As it turned out, I waited just an hour at the bank on Friday morning before collecting sufficient bank notes to cover the next couple of weeks.

This experience was also very illustrative of life in India:

The entire episode is extremely reminiscent of election time in India. During my previous assignment in India, I witnessed the 2014 general election at first hand, where 814 million eligible voters across 28 states registered their votes in over 900, 000 polling stations up and down the country. During this election, voting machines were transported across the extremes of country by high-altitude porters, elephants, camels and bullock carts months in advance at great risk and expense. A polling station was even specially erected for just one voter in the far-flung Gir forest in western Gujarat state, which is inhabited by lions. The entire process took 5 weeks, with results available just 4 days later . . .

These are the type of logistics that India’s banks faced during the last 5 days. Not only is it a question of delivering new bank notes, ATM machines are required to be individually recalibrated to validate and store new 500 and 2,000 notes, staff trained on updated anti-fraud checks, and millions of consumers and retailers educated on the same.

Despite the temporary inconveniences, I feel privileged to be part of one of the most decisive anti-corruption policies ever to be implemented in history. The last 5 days have reinforced all the qualities that make this country – and this period – so compelling.

For the Future of Modern India, Look Beyond the Metros