Complacency is not encouraged, indifference is anathema and ego, a stranger not to go home with.

It’s worth more than academia, sporting prowess, or practical experience. That’s the only message I can draw from social media, when discussions ranging from international tariffs to the virtues of the ‘false 9’ centre-forward are dominated not by economists or footballers respectively but by, in the first case the well-known international tariffs and trade expert, Robert De Niro, and in the second, the universe’s most famous box-to-box midfielder, Luke Skywalker himself.

Neither commentator’s lack of (obvious) credentials represented a barrier to contributing to these debates; in the case of Robert De Niro, a Google search with his name and ‘trade tariffs’ returns a staggering 278,000 responses. That’s more than Paul Krugman (243,000), who is acNobel Laureate and probably the world’s most famous, living economist!

When it comes to Mark Hammill, Google lists over 300,000 results from a search linking him with Wolverhampton Wanderers football club; that’s more than was returned for the current captain, Conor Coady (170,000). A key to this paradox can be found in their respective followings; Mark Hammill boasts 2.92 million Twitter followers, Conor Coady doesn’t currently possess a Twitter account. So influence – even about unrelated subjects – has less to do with knowledge than reach. The capacity to access and engage people.

This is a relatively new phenomenon which politicians, brands, and academia are still struggling to reconcile with their hard-earned credentials.

When the Morandi Bridge collapsed in Genoa, Italy, earlier this year, Italy’s vice president, Luigi Di Maio, wasted no time in apportioning the blame squarely on Autostrade per l'Italia, the private organisation charged with maintaining the infrastructure. No reference was made to the original design (from 1967) and whether it was adequate for the speed, nature and volume of traffic 50 years later. Neither was any reference made to scientific or architectural reports highlighting material faults in the bridge a year before the tragedy.

On what basis was Di Maio able to make such assertions; what exactly are his architectural, engineering, or geological qualifications? He graduated from the University of ‘Twitter’, of course (451,000 followers); formerly known as the University of Life. Di Maio boasts no formal qualifications or documented expertise. He didn’t even graduate from university, despite studying first engineering and subsequently law. So, in effect, someone with fewer credentials than an engineering intern is able to identify the causes of a structural collapse of one of Italy’s most iconic bridges, even before any inquiry has even started! He may be proved right, of course, but the point I’m highlighting is that, today, credibility and influence is not necessarily a function of qualifications in the conventional sense, but of reach.

It’s crucial for brands to appreciate this phenomenon; their reputation is less likely to be determined by dedicated, informed experts, than so-called uninformed but extremely influential consumers. And this influence is typically concentrated into distinct moments which represent a huge risk/opportunity for the brand. 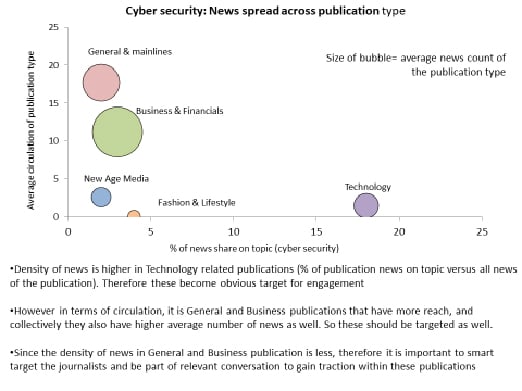 This point is further illustrated in the diagram above (Meltwater data from Oct-Dec ’17; online and new age publications). Conversation on cybersecurity is no longer restricted to technologists; it has become a mainstream conversation. In reality, the latter focuses on security breaches, data losses and privacy issues; in short the Second Peak described above. Relevant brands have to understand that such conversations are not propagated by experts and a technical response is unlikely to address any concerns.

Looking at the general and mainline discussions, for instance, these are focused on consumer concerns regarding privacy and security. The business and financial coverage is all about data breaches and risks associated with the same. Neither case requires a technical (in this case technology-based) response; both require an explanation on the issues, how to minimise risks and what to do in the event of a breach.

These are the key lessons from the ‘Di Maio Effect’ where reach (particularly across social media) is more influential than expertise:

In such a scenario the ability for a brand to connect and remain relevant before the Second Peak occurs is crucial.

It’s about listening to the audience and remaining relevant to them over the long term. I’ve written extensively about this, and in such an environment, so-called Big Circle engagement is more important than ever.

So, whether prognosticating about football, or discussing politics, consumers are not relying solely on so-called experts to form and validate their opinions.

And neither should brands.

Fake News will Herald a Media Renaissance; Generation Z will Force Brands to Look ‘Beyond the Algorithm’

Agency Life and the ‘Law of the Shiny Object’